Chaney Jones doesn’t see the resemblance between her and Kim Kardashian.

Kanye West‘s latest flame was stopped outside LAX on Friday, March 18 and touched on the comparisons some fans have made between her and the rap artist’s ex. When asked by TMZ if she if she sees a similarity between herself and Kim, the curvy, dark-haired model responded, “No not really.”

She also insisted that the topic of Ye’s estranged wife—with whom he shares four kids: North, 8, Saint, 6, Chicago, 4 and Psalm, 2—does not come up in their conservations.

“We don’t speak about her,” she said of Kim.

Following his split from Julia Fox, last month, Kanye has been spotted out several times with Chaney. The 24-year-old first made onlookers do a double take when she seen partying alongside the rapper wearing a black catsuit, along with tall Balenciaga boots and coordinating handbag and a huge pair of blue sunglasses. Eagle eye fans were quick to point out that the look resembled the outfit that Kim rocked at the 2021 People’s Choice Awards back in December. 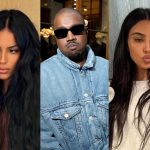 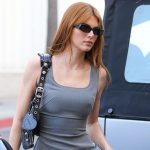