Katy Perry is turning towards ancient practices to be a more woke mom.

During the David Lynch Foundation’s “Meditate America” virtual event, which premiered on Thursday, Dec. 3, the “Smile” singer opened up to Hugh Jackman and his wife Deborra-Lee Furness about the one major “challenge” she’s facing as a new mom to daughter Daisy Dove Bloom.

“My daughter, she’s such a gift, but there is sometimes a challenge concerning sleep,” the 36-year-old star confessed. “No matter how much support you have. But where am I going to get those six hours that I used to get? Where did it go? And it went, but I know how to get it back.”

The Grammy nominee went on to detail her use of transcendental meditation and how it’s been a major game-changer in giving her small breaks during the day.

She expressed, “There’s been so many different ways TM has blessed me, but in this particular moment, as a new mother, I take 20 minutes.” Katy noted that the practice gives her “the deepest reset” that her body and brain were “desperate for.” 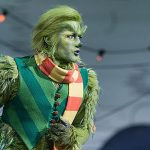