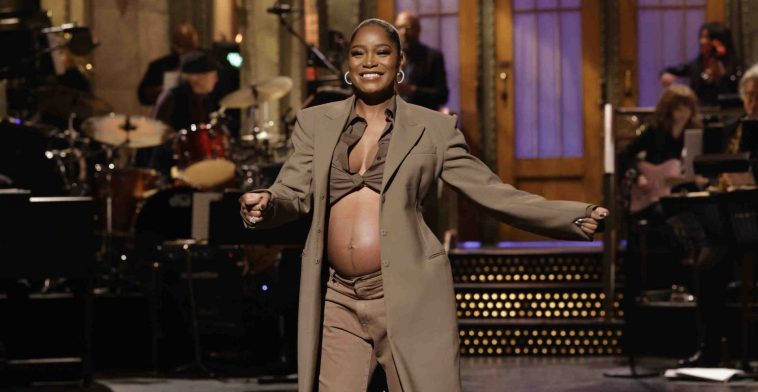 Keke Palmer is joining motherhood! The 29-year-old star confirmed weeks of pregnancy rumors by revealing her baby bump during her first hosting of Saturday Night Live.

This will be her first child with her boyfriend, Darius Daulton Jackson. She shared the milestone during her opening monologue for the show.

“There’s some rumors going around, people have been in my comments saying ‘Keke’s having a baby, Keke’s pregnant, and I wanna set the record straight–I am,” Keke said.

Then, she ripped a grey trenchcoat open, exposing her bare baby bump to the cheering audience. She gave viewers a side look as she cradled her bump and wiggled with joy and laughter!

After hilariously fumbling with closing the coat, she explained how hard she was trying to keep the news on the hush.

“…it is bad when people on the internet spread rumors about you y’all, but it’s even worse when they’re correct. I mean, like, I was trying so hard to keep it on the down low ’cause I got a lot of stuff going on, you know,” Keke said before telling a joke about letting her sponsorship checks clear. Then she added, “but honestly this has been the biggest blessing, and I am so excited. Guys, I’m going to be a mom.”

After Keke dropped her pregnancy bombshell, Darius took to Instagram Story with a sweet repost. The expectant father shared a photo of Keke cradling her baby bump during a restaurant outing. He wrote “2023” on the image along with a red heart emoticon.

According to Bustle, Darius and Keke started dating in the summer of 2021 after meeting at Diddy’s Memorial Day party. By August, they had made their relationship Instagram official. This year, in March, she told Bustle that she revealed her relationship after deciding to stop into “boss behavior,” aka doing “whatever the hell” she wants to.

“This is the happiest I’ve ever felt with someone,” Keke said. “So why would I go out of my way to hide this person? That’s a lot more work than just living in my life and being in my life.”

Photos of the couple are no longer available on either of their Instagram profiles. It’s unclear what that means, but the actor and fitness trainer was at his child’s mother’s side on Saturday.

Darius, along with Keke’s cousin Dominque Perry, were present on the SNL set during the announcement. In another video of the actress backstage, Darius held an air mic to Keke’s mouth as she explained the relief of dropping the news.

Keke said she feels “very much relieved.” Adding that she “can’t wait to eat and just lay down and sleep and just be so happy.”

Earlier this year, Keke Palmer pulled a pregnancy prank on her fans for April Fool’s Day. She cleared it up soon after, saying she doesn’t lie but tells jokes. Palmer also said she would be “a mom one day” and have a mini-me to be “silly as hell” with.

Now, that time has finally come! But, as mentioned, rumors were swirling about Keke donning a secret baby bump in the weeks leading up to the SNL gig. Fans started speculating she was pregnant after her wardrobe took an elaborate turn–enter extra baggy ‘fits and poofed-out gowns.

One particular dress, which Keke wore to the CFDA Fashion Awards on November 7, had the innanet in detective mode. The floor-length dress featured a blue-green-white pattern, puffy long sleeves, and a strapless neckline. In photos of the night, Keke appeared to have a glowing face and swollen cleavage–usual indicators of pregnancy.

Well, the baby bump is OUT of its clothes–and celebrities and fans haven’t stopped congratulating the actress on this milestone.

That baby’ll be belly laughing before it’s walking!

Keke Palmer being pregnant and looking so freaking gorgeous and happy…is good good medicine for the soul! Congratulations keke!!!! Ahhhh!! So happy for her!!

It legit feels like my favorite cousin is pregnant🥹 Congratulations Keke😍😍😍

Bro, it’s crazy that we really WATCHED how far Keke Palmer has come in her career. Like I LITERALLY GREW UP with her; Akeelah and the Bee, True Jackson, Beauty Shop, Jump In, her So Uncool album.. and now SNL?! it’s so beautiful to witness man! CONGRATULATIONS KEKE!! 🤰🏽

With PCOS, you’re told you won’t have kids so I know this hits different for her. Congratulations Keke!

Keke ended her monologue with a lil’ jokey joke about being grown–for anyone wondering!

“Even though some people feel a little weird about me having a baby cause I was a child actor, I just wanna say, look, I’m 29 grown, I have sex, I own a home, I stormed the Capitol on January 6, you know? Thing adults do,” Keke said. 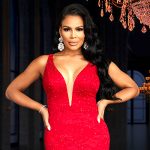 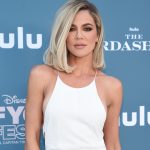