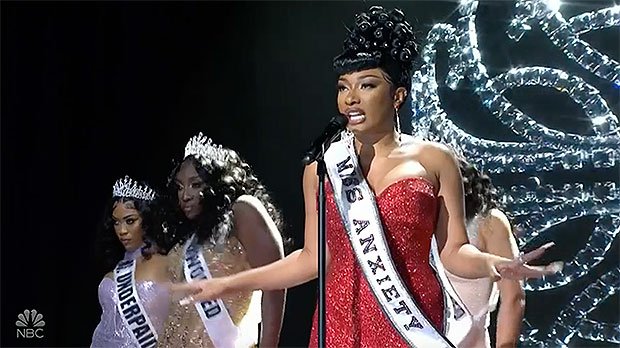 Megan Thee Stallion came to slay with her Saturday Night Live performance on Oct. 15! The rapper, 27, returned to Studio 8H to grace fans with her song “Anxiety.” She wore a beauty pageant inspired gown as she donned a sash reading “Miss Anxiety” for the ’80s inspired vibe. Megan stunned in the strapless sequin dress with a mermaid skirt, surrounded by dancers in sashes reading “Overwhelmed,” “Insecure,” and “Mrs. Overlooked.” A sparkling silver crown appeared on the screen behind the group during the performance, covering the studio’s decor.

Her flow was on point as she dropped bars from the Go Grizzly produced track off her album Traumazine. “People call me rude ’cause I ain’t lettin’ ’em try me/Sayin’ I’m a ho ’cause I’m in love with my body/Issues, but nobody I could talk to about it/They keep sayin’ I should get help/But I don’t even know what I need,” she says in the song promoting mental health awareness.

Megan’s hair and makeup was also on point for the first performance, drawing inspiration from time past. She gave serious Diana Ross and The Supremes vibes with her ’60s inspired up-do paired with her signature, dramatic eye makeup and glossy lips.

She returned for a second performance “NDA” and “Plan B,” bringing the street vibe to SNL. Meg once again looked amazing in a black bodysuit and thigh high cargo boots, along with sunglasses, while her dancers wore leather crop tops. “Ladies, love yourself because this s— could get ugly,” she raps on “Plan B,” which she’s previously said is inspired by past relationships.

The Houston native is no stranger to the SNL studio as she made her headlining performance debut two years ago with her viral tune “Savage” (which also helped blow up TikTok during quarantine). She used the stage to deliver a powerful and poignant message at the time about women and the Black Lives Matter movement.

Megan — née Megan Jovan Ruth Pete — actually made her debut in 2019 alongside friend Chance The Rapper. She helped him with a remix of his track “Handsome,” marking her very first appearance on the show. 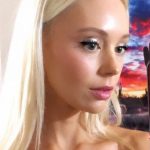 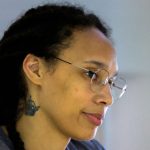