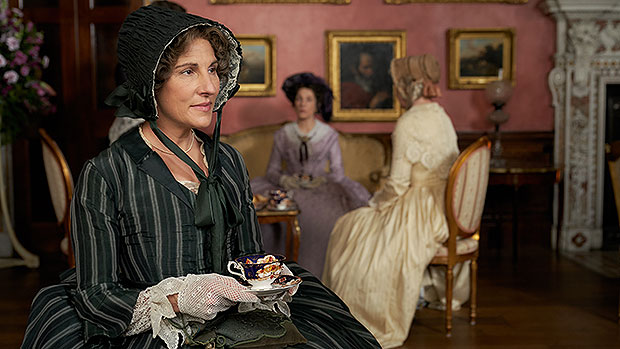 Belgravia is transporting us back to an era of secrets and scandals amongst the upper echelon of London society in the 19th century. The series, based on Downton Abbey creator Julian Fellowes’ novel of the same name, will premiere April 12 at 9 p.m. on Epix. When Anne and James Trenchard accept an invitation to the now legendary ball hosted by the Duchess of Richmond on the fateful eve of the Battle of Waterloo, it sets in motion a series of events that will have consequences for decades to come. Over 25 years later, the Trenchards are still dealing with the repercussions of their decision to keep a shocking secret: their daughter, Sophia, gave birth to a son before she died.

HollywoodLife talked EXCLUSIVELY with Tamsin Greig about how Anne Trenchard has dealt with keeping such a massive secret for so long. She revealed the secret is a ticking “time bomb” because she desperately wants a relationship with her grandson. She also teased the fascinating dynamic between Anne and Lady Brockenhurst as Anne seeks to tell the truth. Read our Q&A below.

How has keeping this massive secret about her grandson weighed on Anne over the years?
Tamsin Greig: It’s a question that we all struggle with at some point in our lives, where we have agreed to keep something very still and very quiet. Like a kind of time bomb. Because of social constraint or the emotional burden of that secret, it’s easier to just not go anywhere near it in case it sets it off. Because she’s in a time where she has become Mrs. James Trenchard, she’s sort of lost her sense of herself as an independent woman, which she would have been to a degree when she was just Anne and her maiden name. She’s not Mrs. Anne Trenchard, she Mrs. James Trenchard. Her husband says to her, “We will tell no one of this.” Because of that social context, there is an unwritten societal rule that his word is lauded over hers. So to a degree, he has the freedom to then go ahead and have this secret relationship with his grandson. But she doesn’t because of her oath and giving her word was a much more powerful and important social contract at that time. She definitely ultimately wants that relationship with him. I think it breaks her heart that she doesn’t know her grandson and that’s the time bomb that is ticking away deep in her heart. When she then is confronted with Lady Brockenhurst, she sees in bodily form the reality of maternal grief and that strips away the layers of her own heart to acknowledge her own grief at what she’s losing because she’s not only losing her daughter, but she’s losing the relationship with the grandson.

What can you say about the dynamic between Anne and Lady Brockenhurst over the course of the season?
Tamsin Greig: Well, what I think is so interesting about what Julian Fellowes has chosen to do is that the signature of that period really is the beginning of the Industrial Revolution and the rise of the middle classes and power resting very much in the hands of the patriarchy of men. What Julian chooses to do is put two women at the heart of the story, so actually, their power is in emotional truth. They then become the drivers of the story and Anne goes behind her husband’s back to reveal a secret to this woman. Not because, like her husband, she has ambition and wants to have power over Lady Brockenhurst, but because she wants to level with her. She has the purest form of compassion for her. She goes into it with a compassionate heart and what she meets is an irresistible force, he pair of them standing up against each other. I think Lady Brockenhurst is surprised that she’s met her match in this middle-class woman who shouldn’t have any access to her.

Losing a child is devastating. How do you think Anne has processed it versus her husband?
Tamsin Greig: I mean, politically, I found something that I thought was very interesting. At the time, one in three babies died in childbirth, and one in five mothers died in childbirth. Now for us, that’s an unthinkable statistic because people don’t die in childbirth now. Sometimes babies will be born stillborn or they will be lost at some point in the process, but it’s rare for mothers to die. I think I had to reframe my understanding of that and just shelve our own reality and reframe it to Anne’s reality, which was the baby might not survive and the mother might not survive. Grief hung around in that society. It was a part of their normal. I think there may well have been ways of dealing with those sorts of losses, or there was just a lot of stuff buried in underground bunkers that was just going to leak at some point. To answer your question, Anne deals with it by putting it into an underground bunker and thinking it won’t affect her if she doesn’t think about it. James deals a bit by secretly going and having a relationship with him because then his grief can be compensated in some way.

I imagine that’s been very lonely for Anne.
Tamsin Greig: There is an extraordinary loneliness about her and great courage and fortitude to keep on going. But as you watch the series, I was really fascinated by what John Alexander, the director, has done with the story. He’s brought a very beautiful instrument to the story — what happens to the child that’s left? Oliver is the surviving sibling. Anne has lost her daughter, the child of her heart, but the boy that is left, his grief is not attended to. What happens to unattended grief? It creates this man who lives under a cloud of depression and lacks ambition, focus, self-belief, and a sense of identity.

Is the series a faithful adaptation to the novel?
Tamsin Greig: It’s a pretty true adaptation from that novel. I did a very geeky thing where I would cross-reference the scenes with the prose in the book. It all fits together very satisfyingly. There were elements of this prose that were really helpful in revealing elements of the character and what was under the dialogue, all that was unsaid. It’s pretty faithful to that story. Julian is a very accomplished storyteller. He absolutely knows about narratives and how to make TV shows a page-turner. 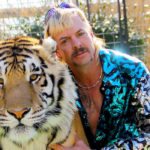 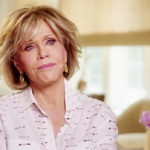